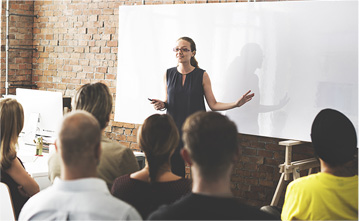 Australian women have had the right to vote for more than a century, yet are still significantly under-represented in our nation’s decision-making.

Despite success stories such as Deloitte’s CEO Cindy Hook, Australia Post’s Christine Holgate and, while it lasted, our first female Prime Minister, the top levels of business and government remain overwhelmingly male-dominated. Men hold 79 percent of executive leadership roles in ASX 200 companies, and women occupy just 11 of the ASX 200 CEO positions. Employment and workplace expert Conrad Liveris has put a novel spin on the state of affairs by noting that there are more ‘Andrews’ in Australia’s top jobs than there are women.

To be clear, the business case for women’s career advancement doesn’t purely hinge on women missing out on senior opportunities. For our corporate leaders, there are also great financial upsides when there are more female leaders in organisations.

A study by the Peterson Institute for International Economics, based on over 22,000 firms across the globe, found that a move from no female leaders in a company to at least 30 percent representation was associated with a 15 percent leap in net revenue. That is a considerable financial shift that any CEO would welcome.

We know that when women thrive, businesses thrive. So, what’s causing the disconnect between the positive results associated with women in leadership and the low numbers of women in our top jobs?

My observation from working with diversity-conscious organisations across APAC is that that there is a genuine commitment to shifting the gender dial. Many progressive companies are developing robust workforce analytics and implementing strategies to increase the representation and advancement of women.

We also know senior leaders play a big role.  It’s undeniable that their influence counts. It’s interesting to see companies holding senior leaders and their teams accountable for divisional gender targets. The idea is to expand the conversation to the senior ranks and drive real change. This feels progressive and positive, yet I can’t help but reflect that for these senior leaders, it’s yet another responsibility.

Further, if the focus is chiefly on what needs to be done, then it’s just another task, and it’s easier to get fatigued about the advancement of women. I wonder how much time is spent discussing ‘why’ – the benefits of diversity and inclusion. After all, when we are equipped with a compelling reason, we are driven, purposeful and action-orientated. Just look at the massive movement triggered by domestic violence advocate Rosy Batty, when she asked everyone to be responsible and speak up.

In our leadership development work at leading Australian corporations, an ever-increasing number of promotions are being achieved because of sponsorship. This is earnt, rather than imposed through a program, giving emerging female leaders exposure to senior leaders and experiences that are otherwise out of reach. For emerging leaders, it’s a chance to be visible and demonstrate their value. It also seems to give the senior leaders a stronger sense of purpose in their own diversity pursuits, enabling them to feel the impact of their contribution.

It’s wonderful to see senior leaders spending more time engaging with emerging women, seeing their potential and offering them elevated roles. They promote diversity in their workplace much more effectively than their company’s recruiters.

The changes they are making in gender equality today will contribute to a broader shift and pave the way, not only for emerging female leaders, but the next generation, which may well include their daughters.